skip to main | skip to sidebar

I've got a new home on the web! Check out www.andybrews.com, which will have lots of great new content as well as the archives of posts past. Make sure to update your feeds and tell your friends!
Posted by Andy at 9:48 PM No comments:

Homebrew competitions have had a steep learning curve for me, and the experience has been a mixed bag as a result. I've entered two competitions previously, to mostly mediocre scores (28 for a milk stout and 28.6 for a vanilla porter I brewed in 2014, and 25 for an oatmeal stout I entered in 2015, all out of 50). Using the BJCP scoring guide, that puts them range of entries that are "good" but "[miss] the mark on style and/or minor flaws". This was a bit disappointing at the time, but the feedback was really helpful as a learning experience.

What I Learned From Previous Competitions
Although my scores were not awful, they were instructive on how I could improve my brewing, and even more critically, how I could improve my entries for competition. As I learned from reading many sources, it's not enough to brew a good beer--you also have to brew a beer that hits the points that judges are looking for within a flight of entries. Time and introspection have shown the following:
Although I was disappointed that I didn't get any medals in my first two competitions, they were a valuable learning experience. Firstly, I gained confidence that my beers weren't awful. Nothing the judges said indicated that I had tremendous process flaws--it was a matter of relatively minor tweaking to transform decent beer into good beer into great beer. I also gained an understanding of the competition process--brewing for a medal can be (but isn't necessarily) different from brewing for personal satisfaction. I might have the best vanilla-infused porter on the planet, but it will never do well if the judges are expecting a standard porter.

Renewed Efforts
Based on my adequate, but not great, performances, I was a little cynical on competitions. I liked my beer, and many of my friends said they liked my beer, so why bother with the dog-and-pony show of a formal beer competition? I had accepted the lessons mentioned above, but wasn't confident enough or filled with enough energy to test the waters in another competition.

Thankfully, I have a homebrew club to kick my butt into gear.

At the December meeting of Horse Thief Brewers Association, our president noted the upcoming "Romancing the Beer" competition, sponsored by Thousand Oaked Brewers. He wanted to see a good turnout for "The Thieves," and even offered to transport the beers personally to the entry center. I came to a final realization--what would it hurt to try again? No entries, no awards.

I decided to enter my 80 shilling ale, imperial stout, Berliner Weisse, and Irish stout. They were pretty fresh, decent brews (in my opinion), and for at least two (the Scottish and the Irish beers) were in categories that don't always get a lot of entries.

Due to my own incompetence, I only ended up with three entries, because I had attached the wrong labels to one set of bottles. Oops! One of my four initial submission was removed from competition as a result (major kudos to the folks in charge for alerting me to this, and refunding my entry fee). So, three beers went into the fray.

And of those three, it turned out the wrong labels were on one (oops again--the wrong set of beers had been removed of the original four). Totally my fault, but needless to say, a Scottish export doesn't score well in the imperial stout category (to the tune of 17/50 as a score). Lesson learned, and I'll definitely double-check the bottle labels next time!

But for my remaining two...what a surprise! I was completely shocked to see that both placed first in category.

My Irish Stout placed first out of the five combined "Scottish and Irish Beer" entries, with a respectable (but not outstanding) score of 36.5 (average of 36 and 37). I suspect it wouldn't have placed so highly if there were more entries, but I'll take a win! And, it was nice to see the beer so well received.

The real shocker, though, was for my Berliner Weisse. It placed first out of 12 entries in the "Sour Beers" category, with an average score of 41.5 (39 and 44)! This was a pleasant surprise on several counts. First, sour beers are a bit in vogue at the moment, and there are some great sour brewers in Southern California. There must have been stiff competition! Second, I had never attempted a sour before, and I don't drink a lot of them, so I really had no idea how my beer really fell on the sour spectrum. Finally, I "cheated" a bit with this brew. It was brew-in-a-bag, and kettle soured. Easy, simple, and apparently successful! That was a nice boost of confidence, to realize that simple techniques could produce something so technically solid in the eyes of a judge.

Final Thoughts
It was a nice boost of confidence to get external validation for some of my brews, particularly after the learning curve of earlier competitions. I don't know if I'm going to enter every competition that comes my way, but I'll certainly be trying a few more in the future. The overall process has forced me to consider my technical processes more carefully, and provided some helpful feedback along the way. That has definitely added up to better beer overall. I don't expect to have such success every time, but I am hopeful for future efforts as a whole, regardless of whether they go to competition.
Posted by Andy at 8:08 PM 2 comments: 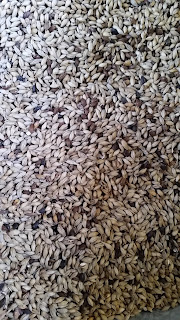 My oatmeal stout is popular--and so it is just about all gone, thanks to the able efforts of many friends and family members. I do like to have a "dark beer" on tap at all times, though, so it's time for another brew. I had thought about doing a "session porter," but thought instead I'd use up a bunch of ingredients and go for something a little bigger instead. I haven't done a robust porter in awhile, so that seemed like a good style to aim for.

In formulating this recipe, I had a two things in mind. Firstly, I wanted/needed to use up a bunch of ingredients. Secondly, I wanted a rich and complex brew. The intersection of these two sets brought in a ton of dark grains--pale chocolate malt, roasted barley, de-bittered black malt, and black patent malt, along with a healthy dose of honey malt and dark crystal malt to bring some rich caramel characteristics. I was okay with having a high percentage of ultra-dark grains, because I felt the beer would need some of that to balance out any sweetness from the honey and crystal malts. I elected to use WLP002 (English Ale yeast), because I had a culture of that in the fridge. Plus, I figured that would add a nice complex and fruity dimension to the beer.

Thus, Accretion Porter was born! The name references the geological process by which some landmasses are formed--successive addition of a random smattering of crust--that mimics the assembly of the grain bill. 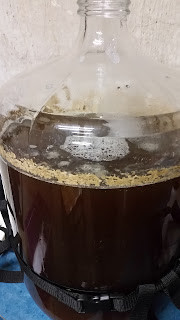 After three weeks in the primary fermenter, I kegged my Transatlantic IPA 1.1 tonight (12 March 2016). The beer was down to 1.015 from 1.060, for 5.9% abv. I added 2 oz. of Falconer's Flight 7C's and 1 oz. of Australian Galaxy hops pellets in a mesh bag, and simultaneously began carbonating at ambient temperature (~64°). All indicators seem positive so far! 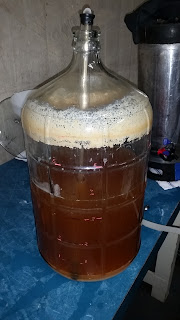 Tonight (24 February 2016), I kegged my latest orange wheat ale. It had dropped from 1.043 to 1.010 gravity, for 4.3% abv. I added the orange extract (I had filtered out the peel pieces, leaving just the liquid), and it has added a great aroma and flavor. Now it's carbonating, and should be ready to tap in a few days!
Posted by Andy at 9:48 PM No comments:

My Transatlantic IPA recipe turned out really well--in fact, I probably count it as the best full-strength (non-session) I've ever brewed. I wanted to give it another go, both to keep my yeast culture active and also to use up some of the hops I have on-hand. Although I really liked the

This batch is slightly modified from the last version, with the modifications nearly entirely in the hops. I also added a bit of gypsum to the boil.